Harvest 2020 in Italy of the highest quality

Harvest 2020 in Italy of the highest quality 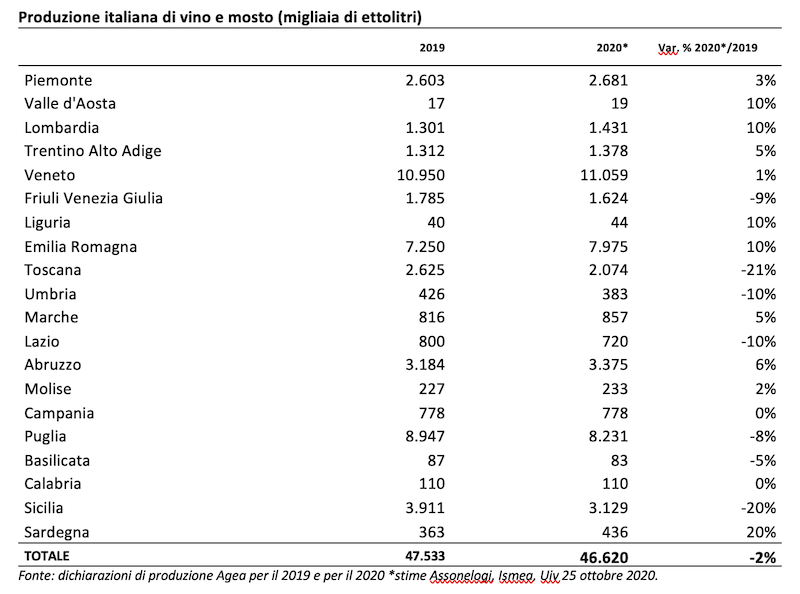 The 2020 harvest in Italy was of the highest quality. Although recording a slight decrease in terms of quantity, thanks to the rains at the end of September, peaks of excellence have been reached throughout the Italian peninsula, from Piedmont to Sardinia, from Sicily to Tuscany and Veneto.

The final report prepared by Assoenologi, Ismea and Unione Italiana Vini highlights “a verdict of a favorable nature with respect to the world economic situation, which delivers a very promising harvest also for the commercial future of the world’s leading wine producer”.

On the quality, quantity almost even: -2%

In particular, the final data underline an overall production of wine and must of 46.6 million hectoliters, with a decrease of 2% compared to 47.5 million hectoliters in 2019. These data record – underlines a note Ismea – a slight decrease also compared to the first estimates of September (-1%, to 47.2 million) due to lower yields both in the field and in the cellar, but which sees the quality bar grow, with a standard that thanks to the weather has risen from week to week.

Analyzing the geography of Italy, the harvest – perfect also from the point of view of the phytosanitary state of the grapes – shows a greater contraction for the regions of Central and Southern Italy, with the exception of Sardinia. Tuscany stands at -21%, Sicily -20%, Umbria and Lazio -10%. Sardinia, on the other hand, is up 20%. Veneto remains substantially unchanged (+ 1%), which with 11 million quintals of wine expected maintains the national production primacy, followed by Puglia, down 8% and Emilia Romagna (+ 10%).
Abruzzo (+ 6%), Trentino Alto Adige (+ 5%), Lombardy (+ 10%) and Marche (+ 5%) also increased quantitatively. The exception for northern Italy is Friuli Venezia Giulia with -9%.